On my second stop of Asia was the crazy and bustling city of Kuala Lumpur. This capital and largest city in Malaysia means literally meaning “muddy river confluence” in Malay. Strangely this muddy river confluence is also the only place where you can find coconut trees in KL. This is also the location of the Jamek Mosque, one of the oldest mosque in KL. It is located at the confluence of the Klang and Gombak River. Unfortunately, Jamek Mosque was closed for renovations at my visit. 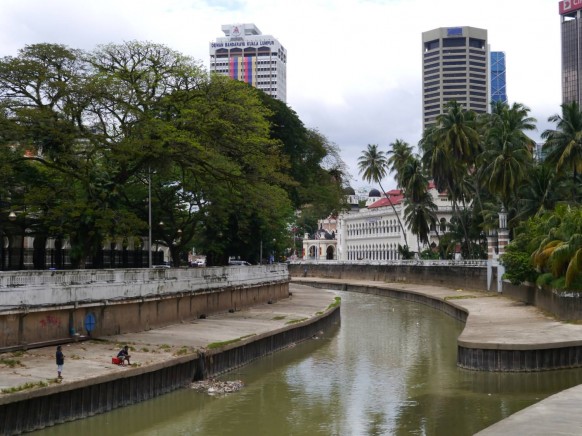 Kuala Lumpur has grown from a small sleepy Chinese tin-mining village to a  to a bustling metropolis of around 6.5 million in  just 150 years. A cultral melting pot with some of the world’s cheapest 5-star hotels, cheap, great shopping, even cheap food.

The undeniable presence of Islamic influences can be found everywhere in the city, its culture,  its fashions and its architecture. Besides its obvious mosques, even modern buildings such as the Petronas Twin Towers and the iconic memorial hall bear traits of Islam. 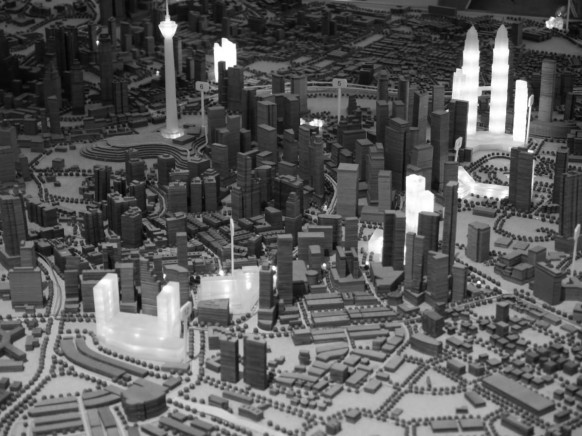 The largest Twin Towers in the world is also the modern emblem of KL, putting the city on the international map.  It represents the ambition of a country to achieve international recognition and industrialization. The towers were designed by Argentinian architect César Pelli. They chose a distinctive postmodern style to create a 21st century icon for Kuala Lumpur. 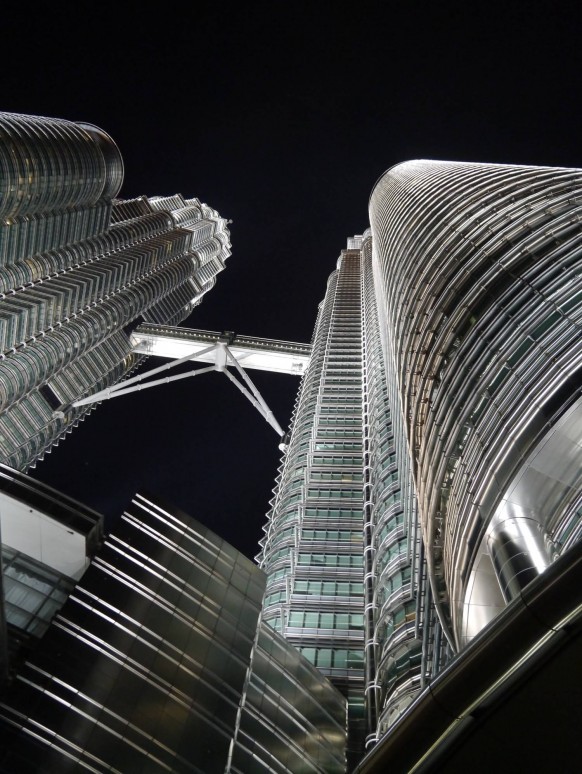 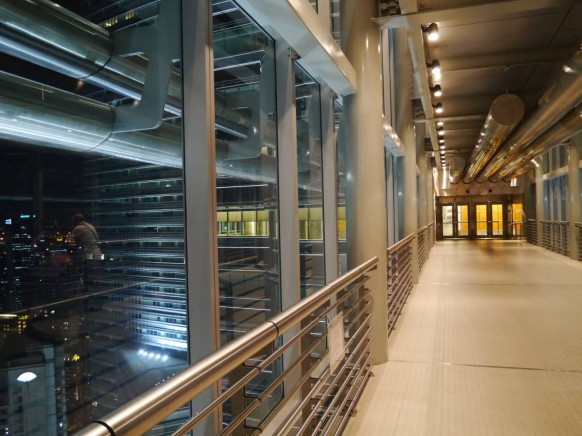 The 88-floor towers are constructed largely of reinforced concrete, with a steel and glass facade designed to resemble motifs found in Islamic art, a reflection of Malaysia’s Muslim religion. Another Islamic influence on the design is that the cross section of the towers is based on a Rub el Hizb, albeit with circular sectors added to meet office space requirements. 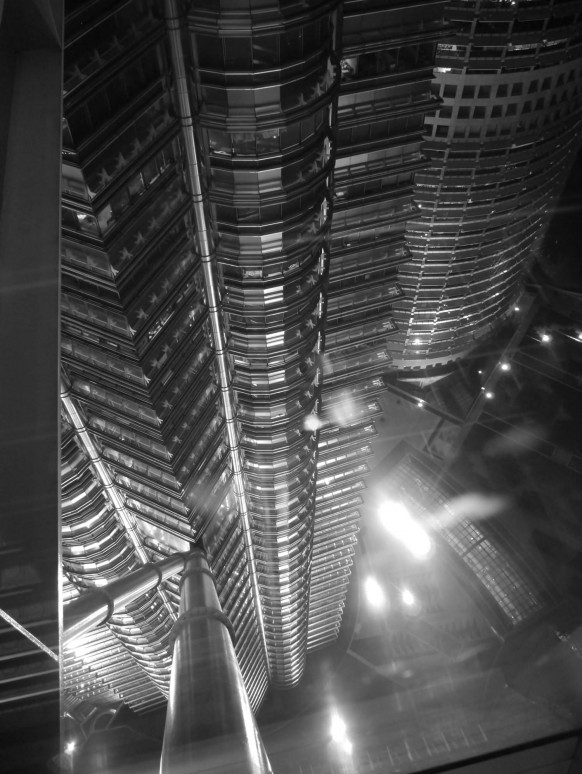 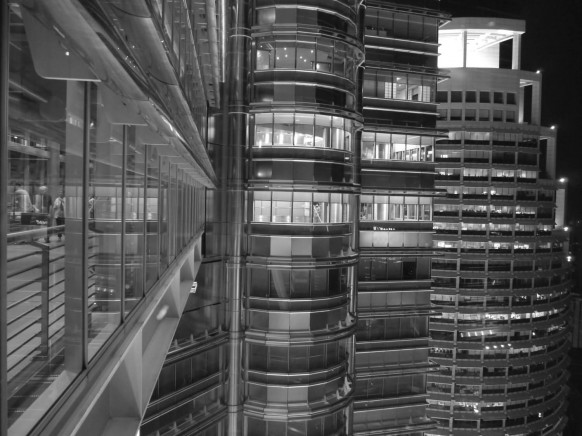 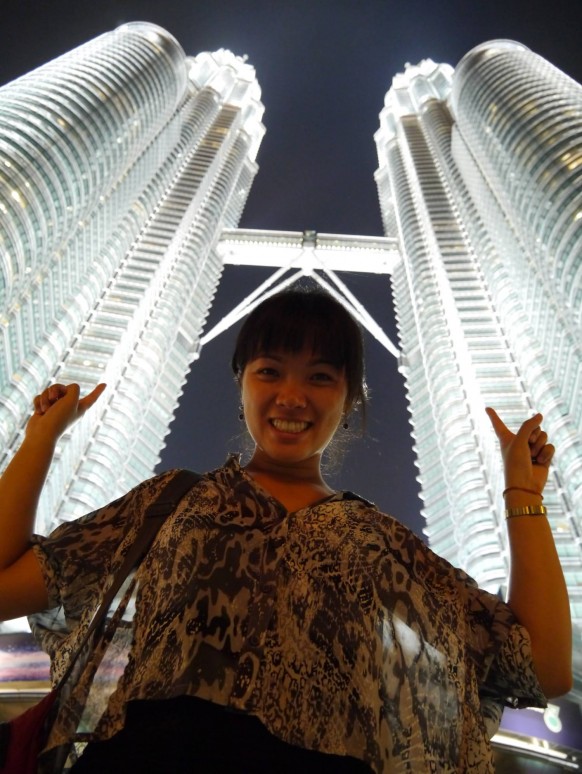 As a result of the Malaysian government specifying that the buildings be completed in six years, two construction consortiums were hired in order to meet the deadline, one for each tower. Tower 2 became the first to reach the top at the time because the builders of Tower 1 ran into problems when they discovered the structure was leaning 25 mm off from vertical. To correct the lean, the next 16 floors were slanted back with specialist surveyors hired to check verticality twice a day until the building’s completion. 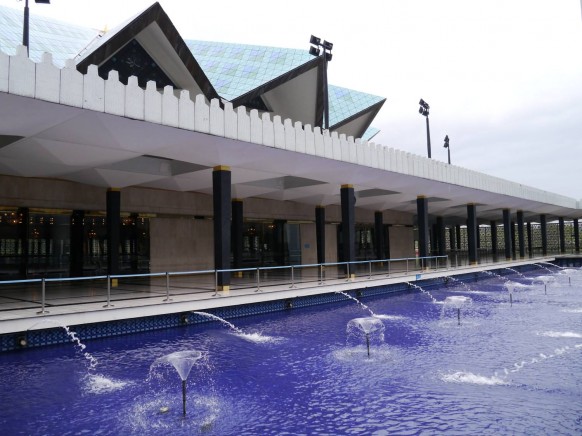 It has a capacity of 15,000 people and is situated among 53,000 m2 of beautiful gardens.  The mosque was built in 1965 on the site of a church which was later appropriated by the Malaysian government.The mosque is a bold and modern approach in reinforced concrete, symbolic of the aspirations of a then newly-independent Malaysia. 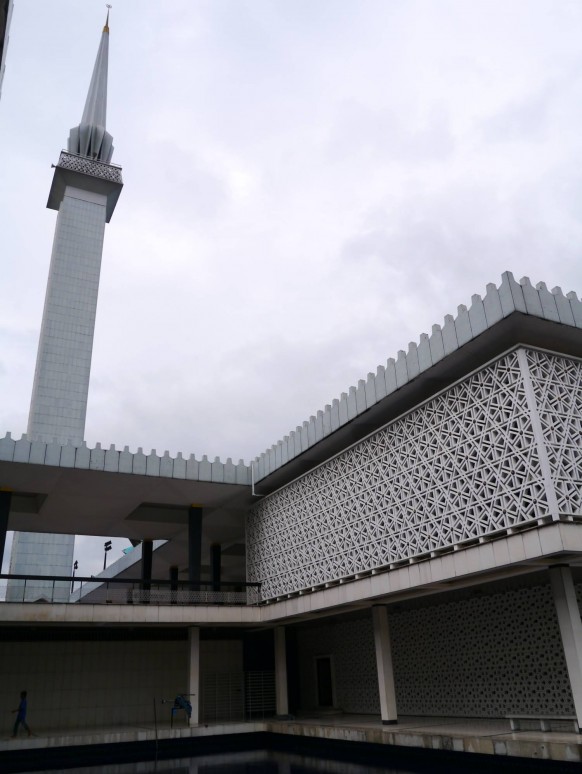 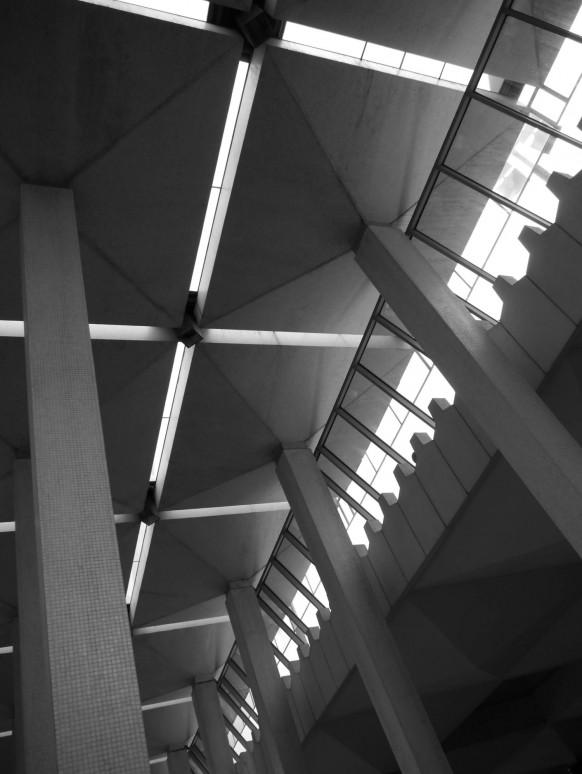 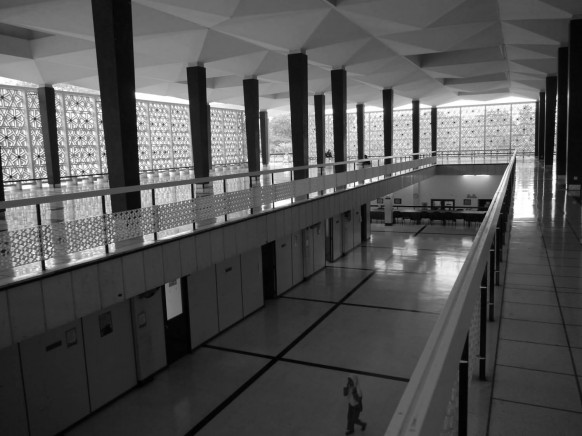 The main roof is reminiscent of an open umbrella, the minaret’s cap a folded one. The folded plates of the concrete main roof is a creative solution to achieving the larger spans required in the main gathering hall. Reflecting pools and fountains spread throughout the compound. 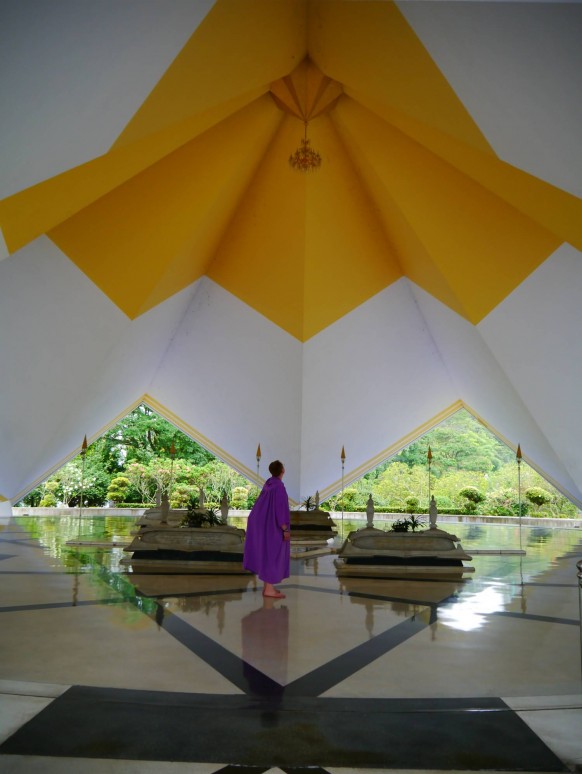 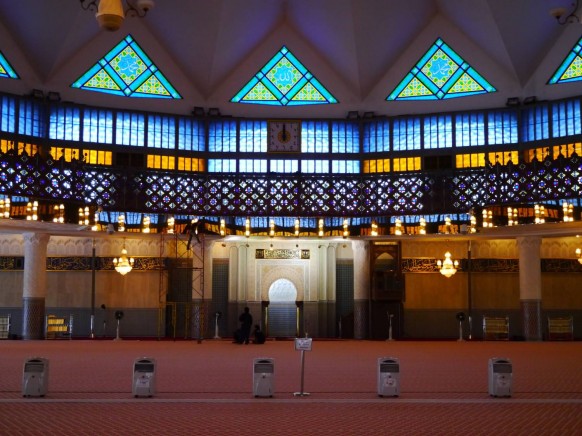 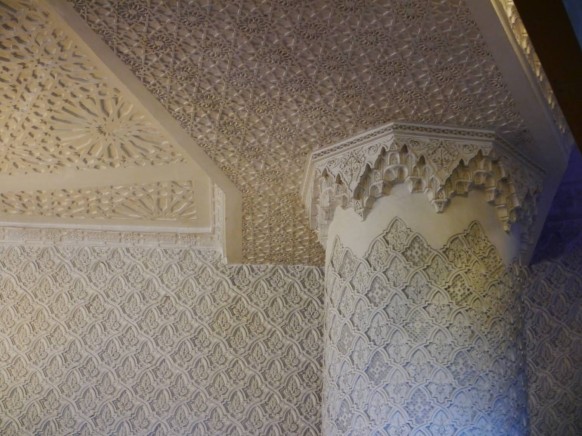 Islamic decoration makes great use of geometric patterns which have developed over the centuries. Many of these derived from various earlier cultures: Greek, Roman, Byzantine, Central Asian, and Persian. They are usually distinguished from the arabesque, the term for decoration in Islamic art based on curving and branching vegetal forms .A recurring motif is a small central square turned 45 degrees within a larger square which can be found throughout the National Mosque. 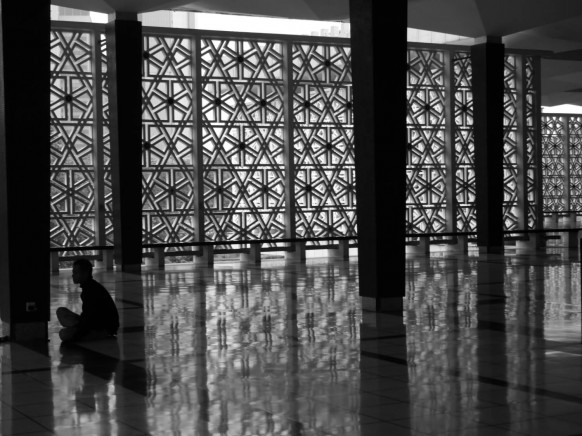 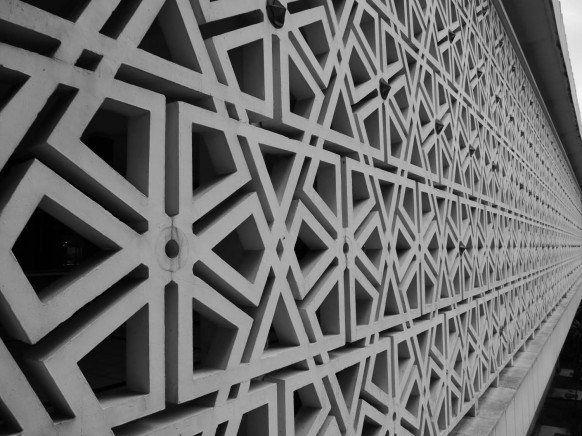 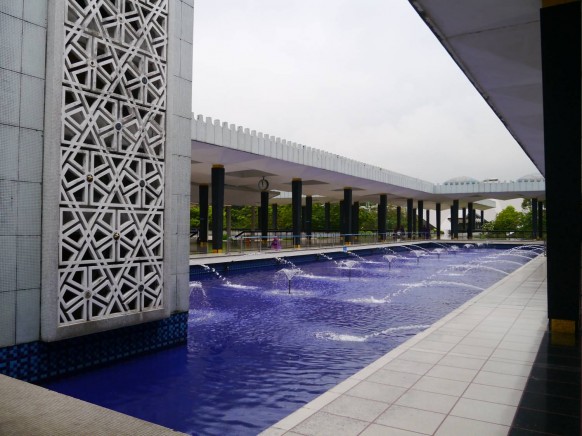 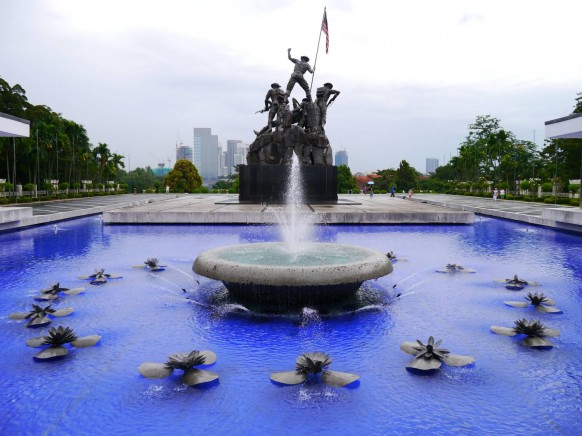 is a sculpture that commemorates those who died in Malaysia’s struggle for freedom, principally against the Japanese occupation during World War II and the Malayan Emergency, which lasted from 1948 until 1960. 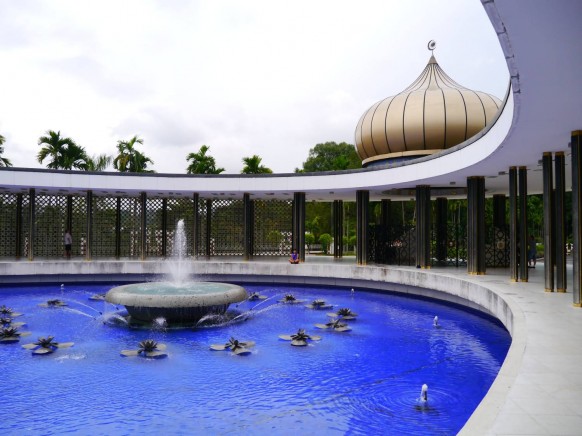