Like any inspiring architect, I had one thing in mind upon my arrival in Sydney. I had to see the OPERA HOUSE. From its majestic sail-like forms to its riveting/controversial stories , the Sydney Opera House is arguably the most recognized landmark in Australia.  After running to the harbor front like a sleepless child on Christmas Eve, I marveled at the panoramic view before me.

Business men and tourists alike sit on the concrete benches enjoying their afternoon beers while large cruise ships are docked near the impressive engineering feat that is the Sydney Bridge. I was enchanted! The Old port in Montreal, despite its similar characteristics, did not have the WOW factor of the harbor in Sydney. Most Australians tell me that Sydney has the glitz and glam mostly concentrated at the harbor. Sydney, being the financial backbone  of Australia, I must say there is some serious $$$ invested in its Harbor. Here, there are projects which architects dream of! 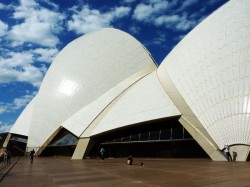 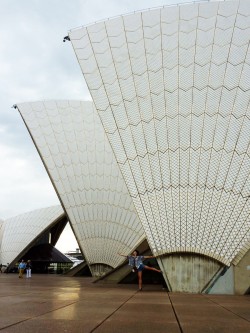 A must for all tourists (architects or non-architects) is the Sydney Opera House tour. Considering the expensive Sydney life-style (my little Canadian Looney is suffering), the 2-hour tour can be quite cheap if you make an early-bird booking online for 28$. As for me, I still had a valid student card from McGill so I paid a concession fee. J  The tour provides an inside scope on the story of the great Opera House. Although the tour is mainly of its interiors which were not constructed by the Danish architect,I still consider it a “must”. http://www.sydneyoperahouse.com/homepage.aspx 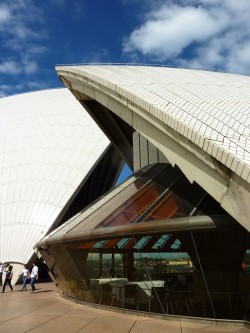 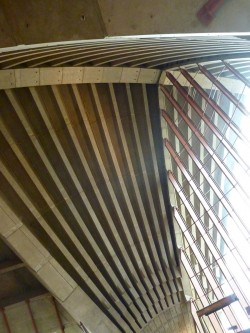 The Story and Man behind

Here is for all you Architect  Nerds, a bit of history. ( aka what you can learn from the guided tour) .The architect of Sydney Opera House, Jørn Utzon was a relatively unknown prior to his submission scheme for ‘International competition for a national opera house at Bennelong Point, Sydney’. Story goes that during the judging of the competition one of the judges, renowned American architect, Eero Saarinen, arrived in Sydney after the other judges had started assessing the entries. He looked through their rejected entries and stopped at the Utzon design declaring it to be outstanding. Utzon’s competition entry was a schematic design, clearly explaining the concept for the building. The sketches and “geometrically undefined” curves of course needed to be developed for the building to be built. This is quite normal for competition projects. Utzon himself was sure it could be built and in the pioneering spirit present in Sydney at the time, construction went ahead. 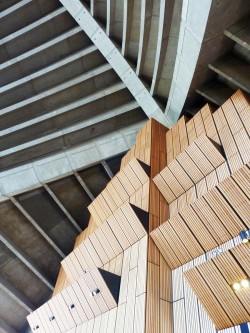 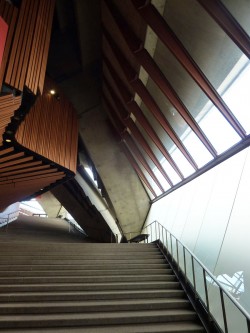 Work started in February 1959 – and the challenges were immediately obvious. Utzon had designed a solid podium base, harking back to the platforms in Mayan temples. On top of the podium he placed parabolic arches – at this stage more like sails than shells – which gracefully curved down to the base without apparent support. 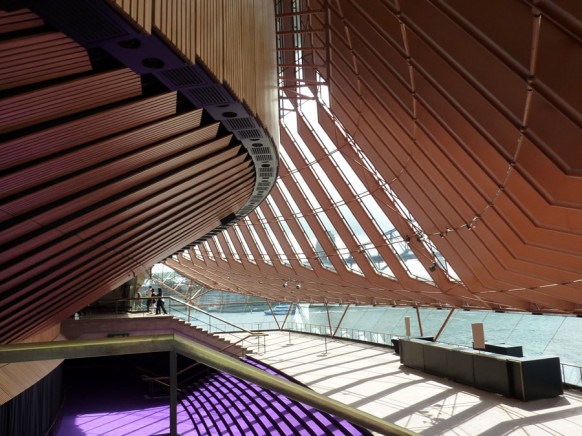 Working with Arup, known for its engineering achievements, Utzon searched for an engineering resolution which can express the beautiful forms which he had dreamed of.  Time was running out and so was the budget. Situation seemed even bleak when Arup declared publicly that the structure of the Sydney Opera House was “insoluble”. Utzon’s designs were way before its time!
Stories reveal that it was, one day, while peeling an orange that Utzon found the solution. He reverted back to the idea of that his “sails” are “shells”. The geometry development was clear when he began peeling off the different sails structures from a spherical shell. A EUREKA moment! Prefabricated concrete ribs interlock to form the shell-like forms of the roofs.  These concrete ribs can be seen through the interiors details. 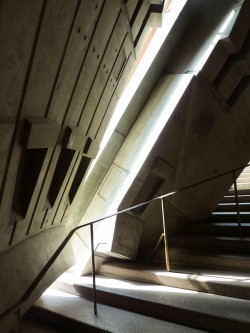 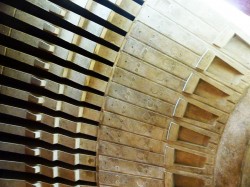 The controversy and the breakup

A change of government in 1965 dramatically changed the situation. It proved disastrous for Utzon personally and for his vision as well. Today’s disappointing interiors are a direct result, as were the almost immediate need for upgrades. The Askin government that came to power in May 1965 was one of the more corrupt governments that New South Wales has produced. On various pretexts, the minister in charge simply refused to pay Utzon. He finally resigned and left Sydney Australia in early 1966. In spite of petitions, rallies and support from leading Australian architects, the government appointed new architects who essentially redesigned the rest of the project. 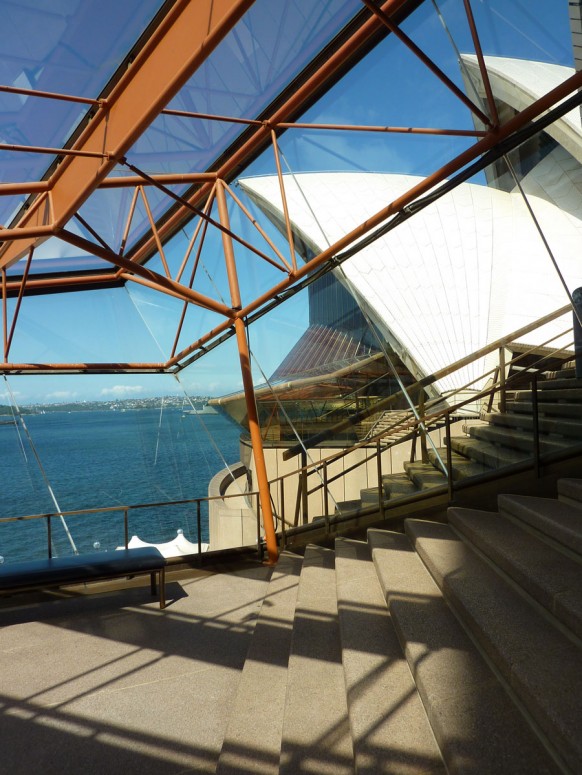 As famous as ever

In 1999 the NSW Government and Sydney Opera House Trust were delighted to be able to reunite the man and his masterpiece. Utzon agreed to be re-engaged to develop a set of Design Principles to act as a permanent reference to guide all future changes to the building.

In June 2007 the Sydney Opera House was rather belatedly included in the UNESCO World Heritage Sites List.

Photography provided by yours truly