I arrived in Ayutthaya with one thing on my mind: Old Ruins! Most of these sites can be visited by boat. You can also bike to most sites as traffic is not as dense as Bangkok and the city center is quite small.

The city capital covers the ruins of the old city of Ayutthaya, Thailand. In 1969 the Fine Arts Department began with renovations of the ruins, which became more serious after it was declared a historical park in 1976. The park was declared a UNESCO World Heritage Site in 1981. 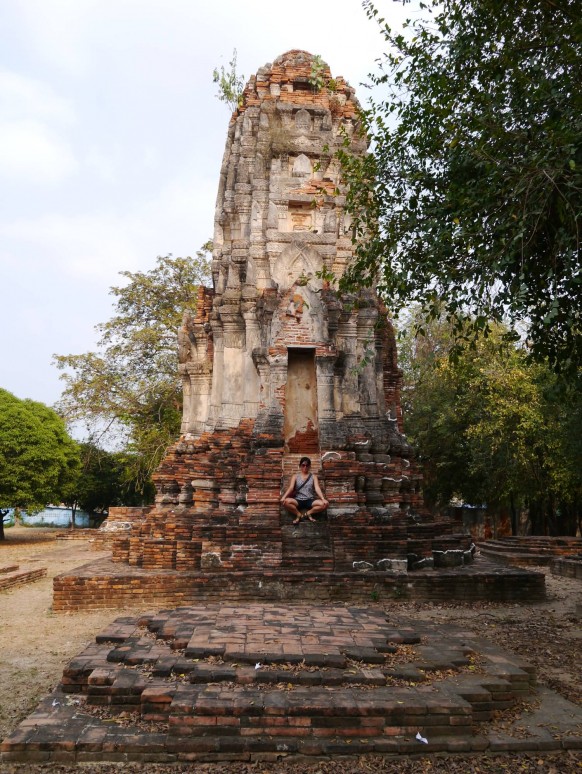 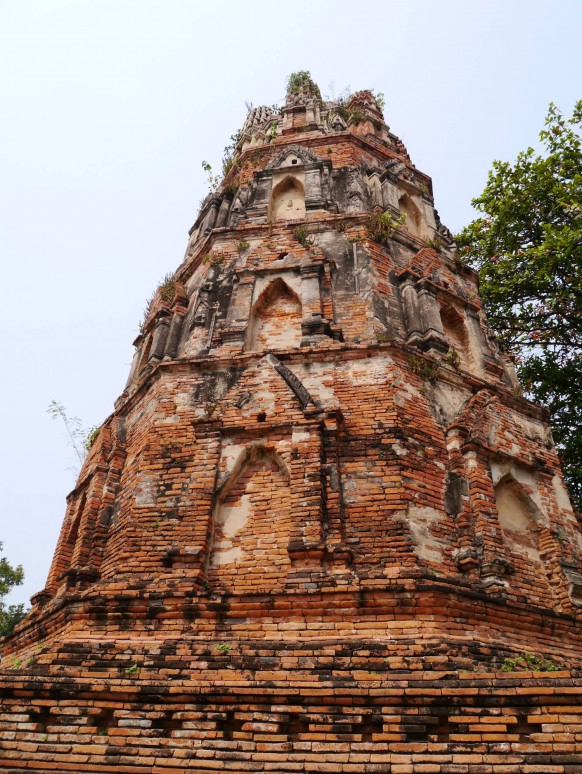 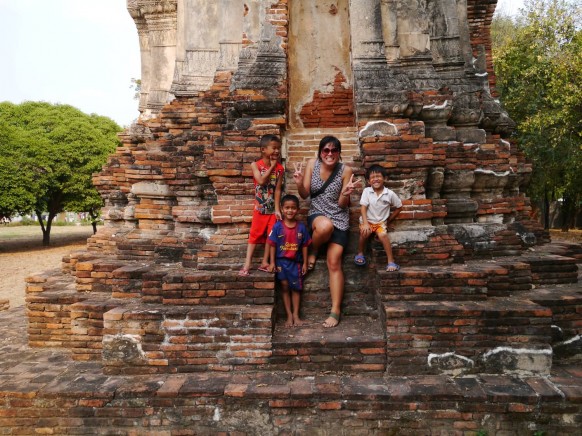 The large palaces and the Buddhist monasteries constructed in the capital, for example at Wat Mahathat and Wat Phra Si Sanphet, are testimony to both the economic vitality and technological prowess of their builders. All buildings were elegantly decorated with the highest quality of crafts and mural paintings, which consisted of an eclectic mixture of traditional styles surviving from Sukhothai, inherited from Angkor, and borrowed from the 17th and 18th century art styles of Japan, China, India, Persia and Europe.

When the capital of the restored kingdom was moved downstream and a new city built at Bangkok, there was a conscious attempt to recreate the urban template and architectural form of Ayutthaya. Many of the surviving architects and builders from Ayutthaya were brought in to work on building the new capital. 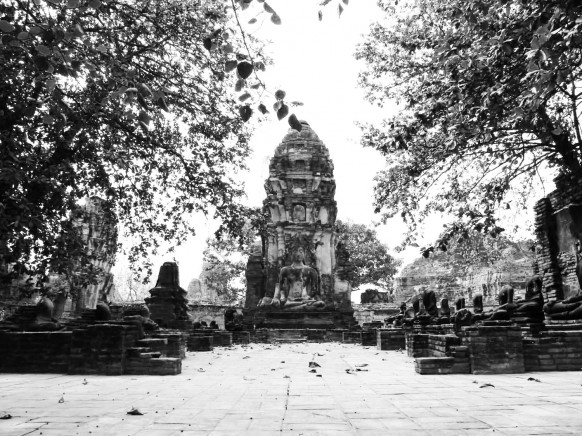 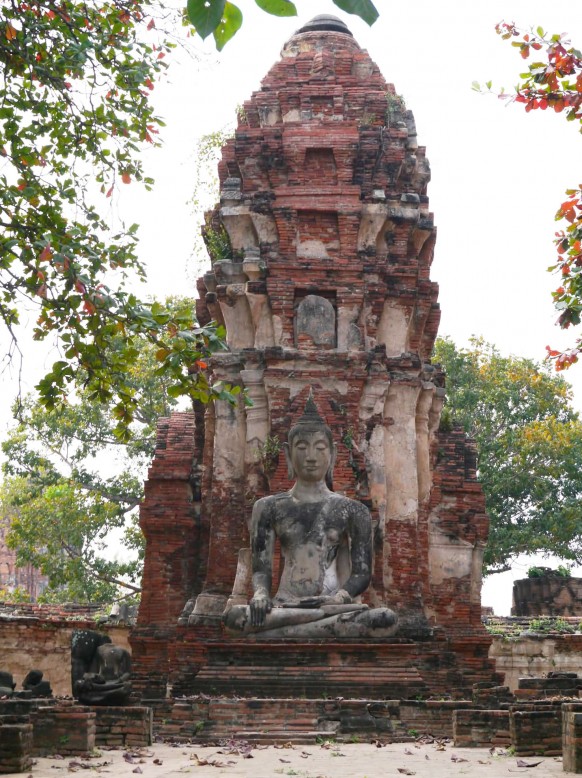 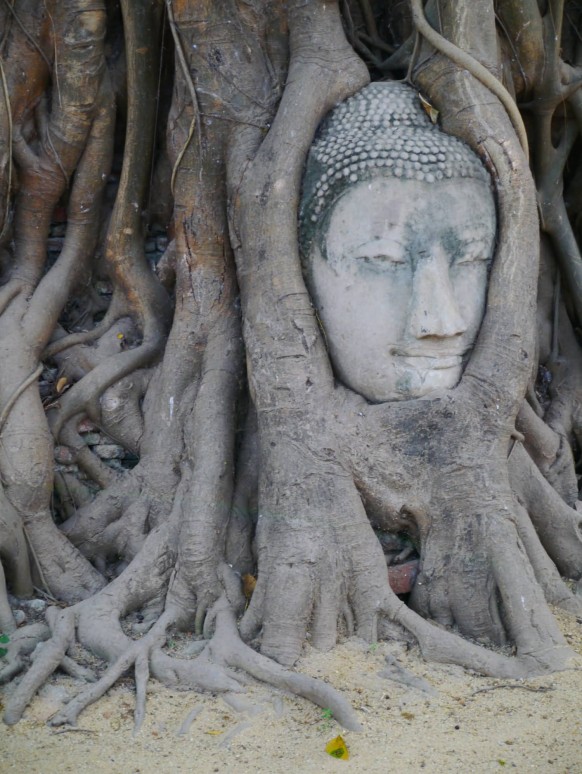 One of the most striking of all of the temples in Ayutthaya, it is located the very heart of the city. According to tradition, Wat Mahathat was built in 1384 by King Rachatirat to house a relic of the Buddha.

In about 1625 the top portion of the prang broke off; it was rebuilt in 1633 some 4 m higher than before. Later it collapsed again, and only the corners survived. In 1956 a secret chamber was uncovered in the ruins; among the treasures found inside were gold jewelry, a gold casket containing a relic of the Buddha, and fine tableware. 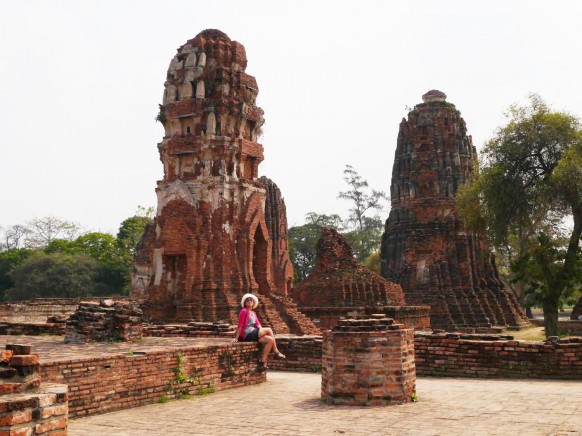 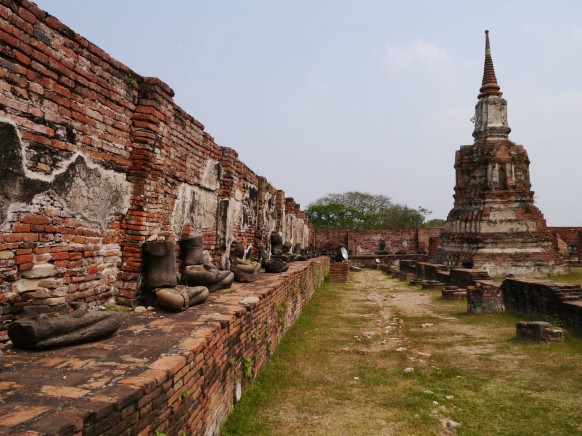 Wat Mahathat is typical of the Ayutthaya ruins: large crumbling stupas surrounded by low laterite walls and rows of headless Buddhas. One Buddha-head is in a tree trunk and is a must see for visitors.

Scattered around the temple are some important remains of variously shaped prangs and chedis, in particular an octagonal chedi with a truncated spire in the Ceylonese style. Nearby, the head of a still much-revered statue of the Buddha lies on the ground. 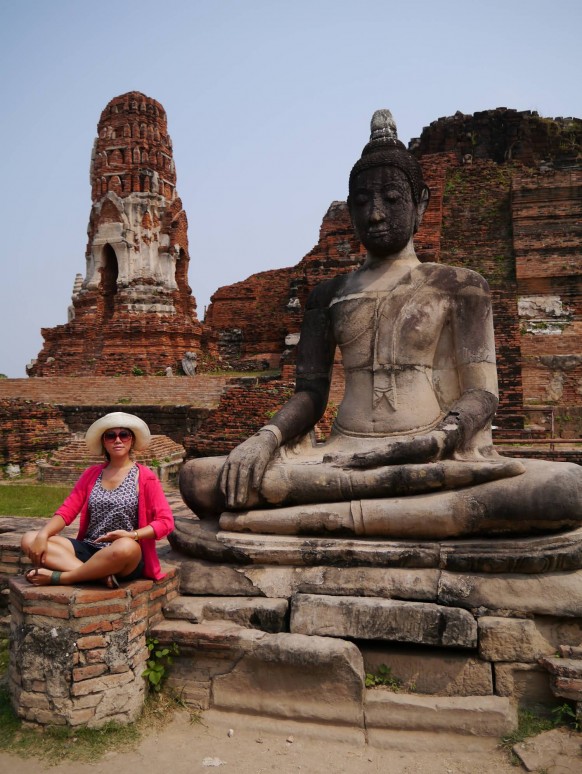 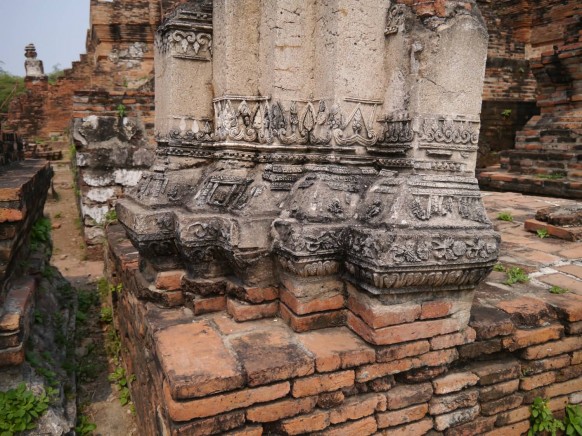 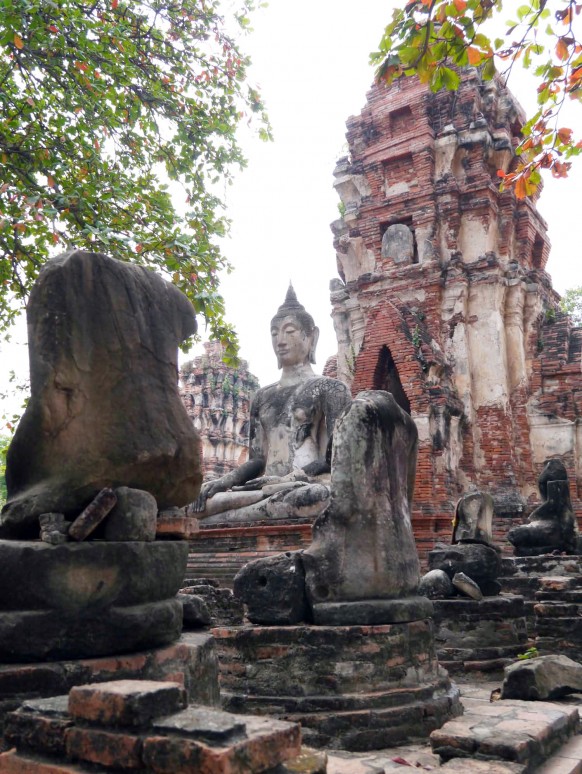 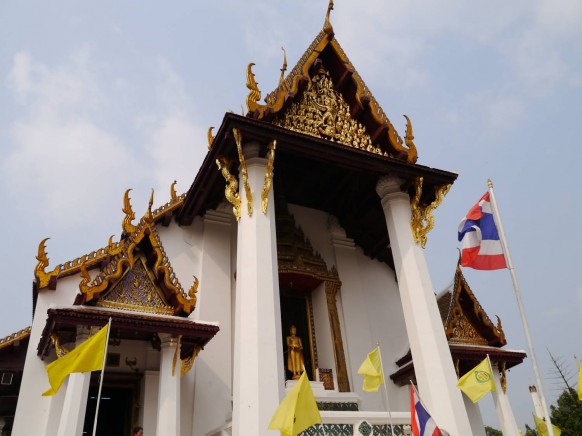 The principal Buddha image at Wat Na Phra Men is seated in the ‘subduing Mara’ position, and wears royal attire. Its full name is : Phra Buddha Nimitr Vichit Maramoli Sisanpeth Boromtrailokanat. Buddha images were royal attire like this are typical for the later Ayutthaya period. 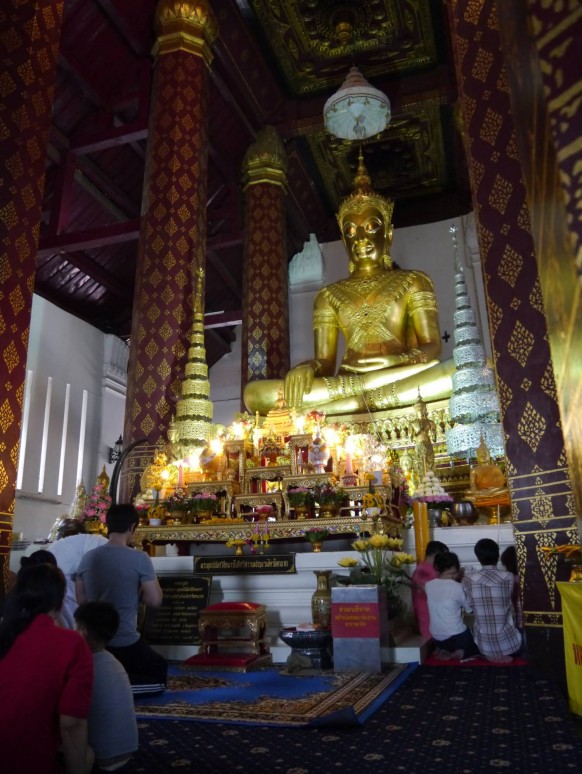 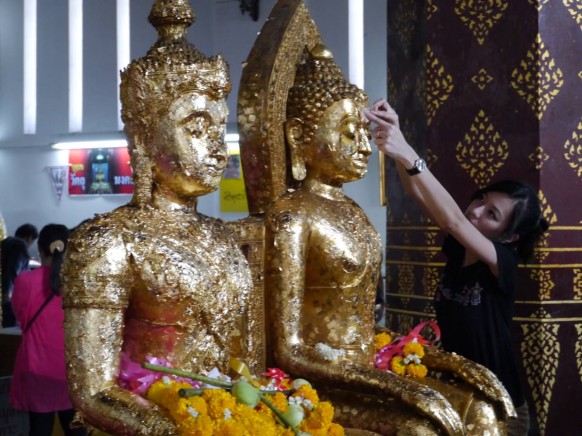 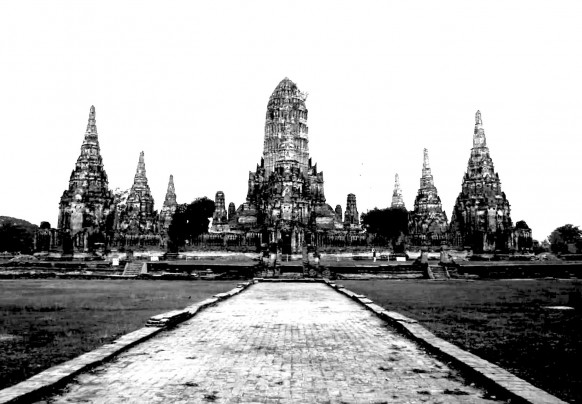 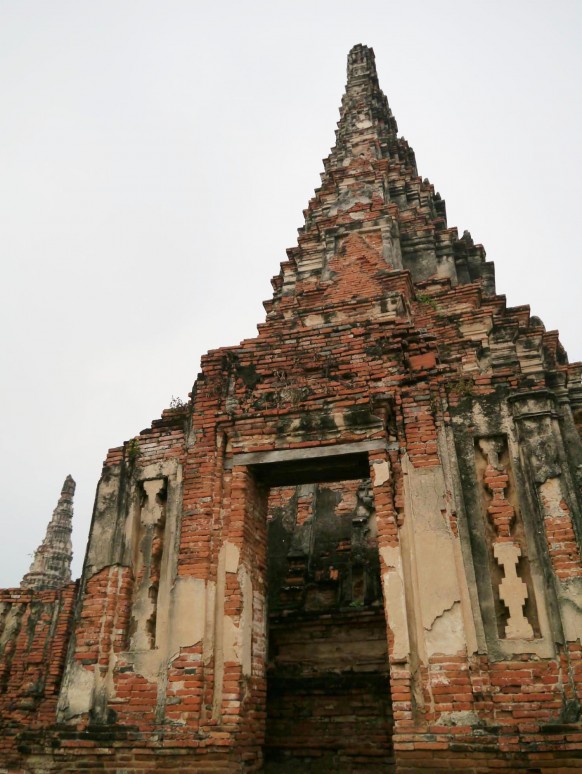 This buddhist temple is on the west bank of the Chao Phraya River, outside Ayutthaya island. It has a central 35 meter high prang in Khmer style  with four smaller prangs. The whole construction stands on a rectangular platform. About halfway up there are hidden entrances, to which steep stairs lead. 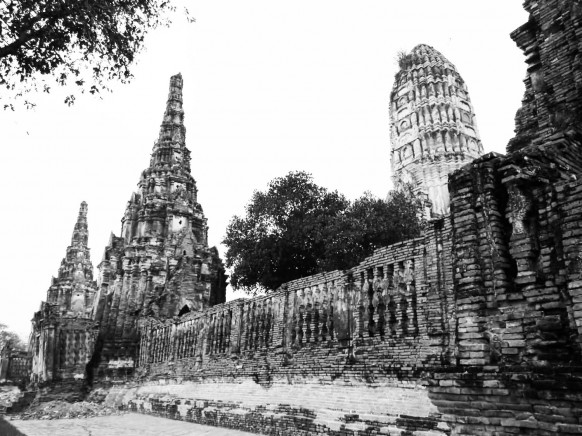 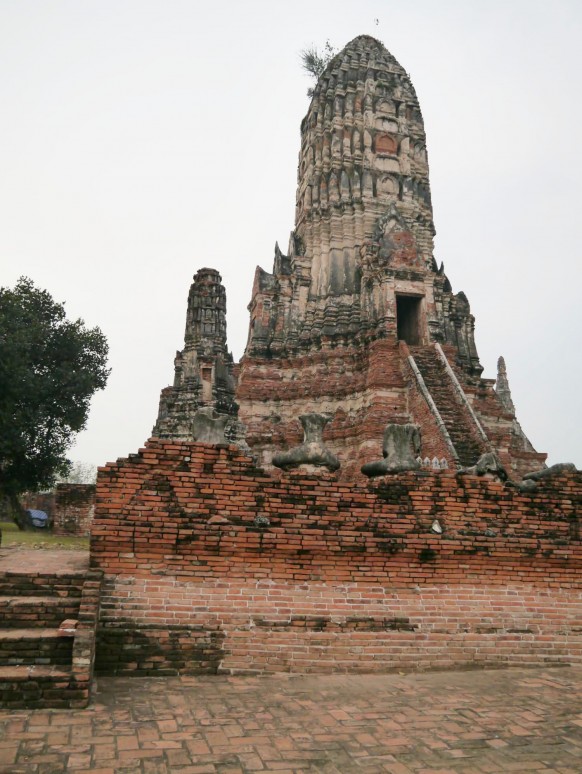 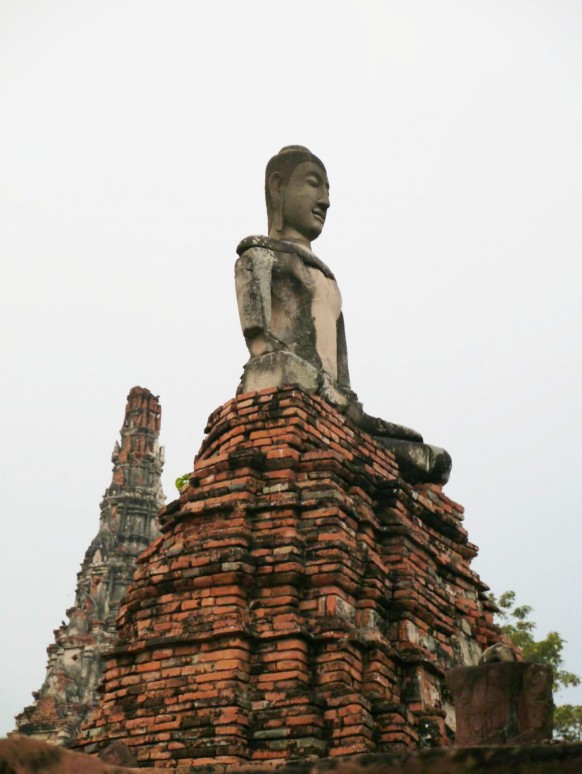 The central platform is surrounded by eight chedi-shaped chapels, which are connected by a rectangular cross-shaped passage. The passage had numerous side entries and was originally roofed and open inwards, but today only the foundations of the pillars and the outside wall still stand. Along the wall, there were 120 sitting Buddha statues, probably painted in black and gold. After the total destruction of the old capital by the Burmese in 1767, from which Wat Chai Watthanaram was not spared, the temple was deserted. Theft, sale of bricks from the ruins and the beheading of the Buddha statues were common. Only in 1987 did the Thai Department of Fine Arts start restoring the site. In 1992 it was opened to the public. 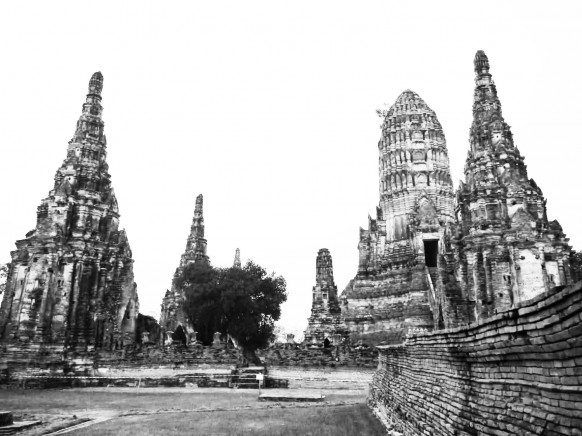 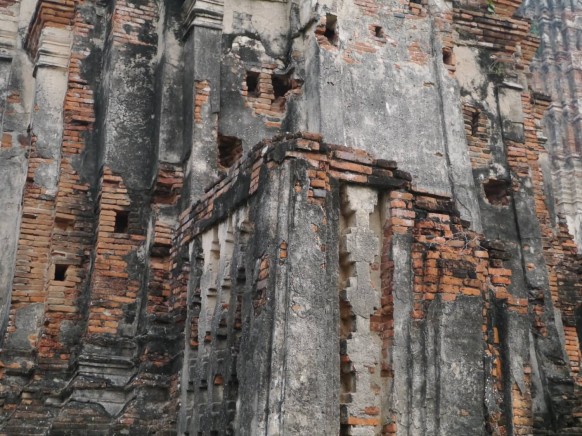 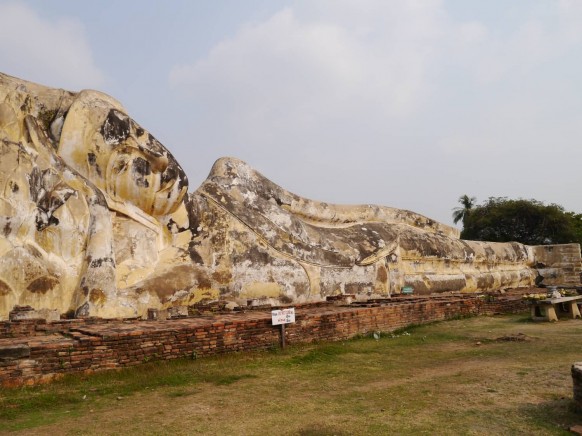 This reclining Buddha was constructed of bricks and cement in the Middle Ayutthaya Period and is 37 meters long and 8 meters high. As the head is resting on a lotus, the legs overlap squarely to show the equalized toes.